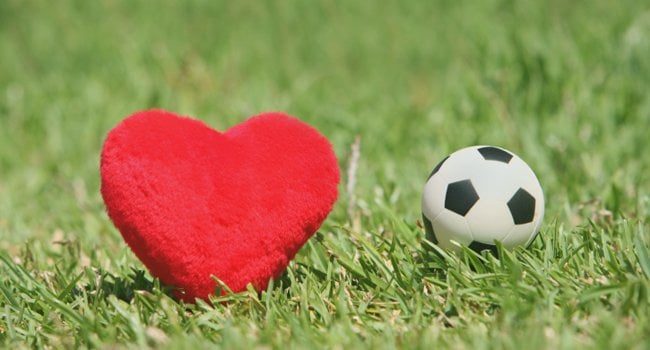 15 reasons to date a footballer

Football is the world’s favourite sport. Those who play it – and by ‘play it’ we mean professionals rather than hung-over blokes turning up for a Sunday morning kick-around – are probably some of the most dateable people on the planet. Here’s why:

1. Footballers can earn a lot of money. Okay, try as we might, we couldn’t leave this one out. Imagine a good salary and multiply it by the biggest number you can think of. That’s how much footballers get paid. For example, Real Madrid forward Cristiano Ronaldo pockets a cool $73 million in wages and endorsements.

2. They travel around the world and sometimes you can go with them. Who wouldn’t want to explore the beautiful places that the beautiful game can take you?

3. Footballers will have plenty of time to look after any potential kids. Their career lasts an average of eight years, and most will have retired by the time they reach 35.

4. They know the importance of a good massage after, ah, strenuous activity.

6. They’re brave. One footballer – Didier Drogba, who plays for Chelsea – helped end a five year war in the Ivory Coast war by suggesting a football match with Madagascar be attended by the warring factions. Surprisingly, it worked and heralded the start of a peace process.

7. Staying healthy is easy with a footballer. Their job requires them to maintain a well-balanced diet.

8. Footballers care about their fellow humans. Many players give money to, and do work on behalf of, charities. For example, Juan Sebastian Veron funds a school in Argentina, Craig Bellamy funds an academy in Sierra Leone, and Pavel Nedved donates his match fees when appearing for the Czech Republic to good causes.

9. They’re multicultural. Footballers are used to having team-mates from all around the world – English players are on the pitch for less than a third of all the games played in the Premier League.

10. Footballers know how to party and have access to all the best restaurants and nightclubs.

11. There’ll be plenty of photos to remember your date by. If there’s anything the paparazzi love more than reality TV stars, it’s footballers on a date.

12. Footballers are good at sharing. They’ll happily pass you things and give you a drink at half-time.

13. They’re super fit. Players can run more than six miles in a single game. Of this, they’ll be sprinting for around three quarters of a mile. In just four games, they’ll have run the equivalent of a marathon.

15. They’ll mow your lawn. Football players are obsessive about the relative length of grass. Anything that hinders an impromptu game is too long.

Would you date a footballer over another sportsperson?