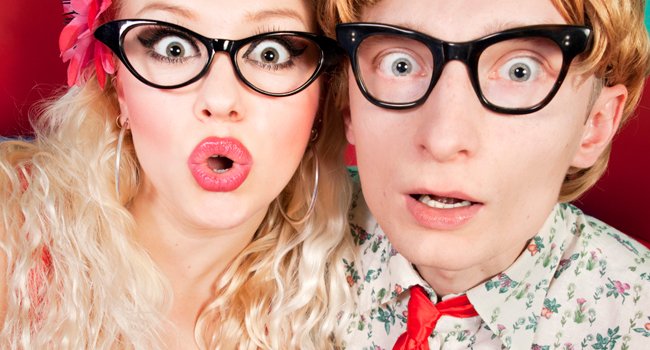 15 reasons to date a geek

Geeks may have been at the bottom of the social food chain once upon a time. But with school days behind us, you’ll find it’s the geeks that get the girls (and boys) – and with good reason. 15 good reasons, in fact:

1. They pay attention to the details

They’ll remember your favourite band, notice when you’ve got a new haircut and remind you when your car needs tax or your travel-card runs out.

2. Geeks are experts at online searches

Which, among other things, happens to mean they give the best, most well-researched presents. So that obscure album you loved as a child, or the book that’s been out of print for years, they’ll track it down come Christmas.

3. Whether they’ve chosen Apple or Microsoft, they’ll defend that decision to the death

Which might sound trivial, but actually it’s hard evidence of their intense loyalty.

So chances are when your computer says ‘no’, they’ll probably be able to persuade it to say ‘yes’.

5. It takes a special person to really be themselves

Funny laugh and weird hobbies included. As a result, geeks tend to grow up strong and that makes them pretty brave in our books.

Which is always encouraging if you’re looking for a serious, committed relationship.

7. Don’t be fooled by the movies

Stacks of pizza boxes and an overflowing laundry basket are the last things you’ll find in the home of a geek. You’re more likely to come across colour-coded clothing and perfectly-wound charger cables (which sounds scary, until you need to find your favourite t-shirt in a hurry!).

It’ll be nothing but the technological best from here on out.

9. Life can be full of problems to solve

So who better to invite along for the ride than the most logical partner you can find?

10. It’s not just the romantic world where geeks are in demand

They’re sought-after in the career market too. So not only are they likely to have a great job now, they can get another one pretty much anywhere in the country – or world for that matter.

11. And if you value intelligence over money

(which, let’s face it, is probably a better place to start when finding your One True Love) You’ll be in luck there too.

12. Geeks don’t tend to take themselves too seriously

And because they’re not afraid to look a bit daft, let their hair down, or laugh at themselves, you don’t have to either.

13. No one plans things out quite like geeks do

You can guarantee they won’t be late, even if they’re crossing the country to see you.

14. And anyway, it’s quite fashionable to be a geek these days

In fact, the thicker the rims and the more technology obsessed, the better.

15. Finally, geeks like to be the best they can be

Which means they won’t want to be outdone in the best boyfriend or girlfriend stakes either.