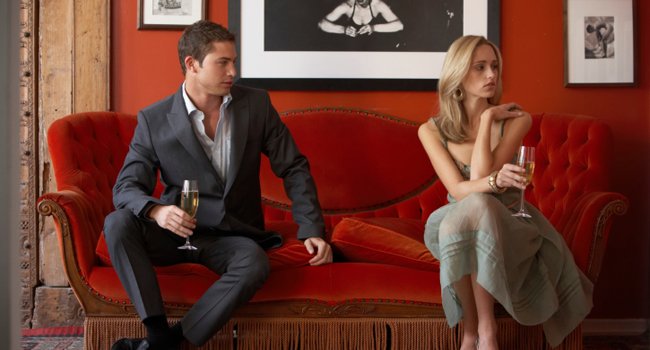 How to avoid an awkward silence

The main reason people get nervous about dates is the fear of silence, of not knowing what to say, or the other person sitting there looking bored and uninterested. Here are some tips to put up your sleeve so you can avoid those awkward moments!

The key to a date that leaves you feeling warm and fuzzy is one where there’s been a real connection between you. This connection is usually made through good conversation – when the right balance has been struck between talking and listening and there’s a sense that you’re on the same wavelength.

Part of the reason we become tongue tied in conversation with someone new is because of self-obsession. If all your attention is focussed on what they think of you or whether what you’re saying is interesting the conversation will be awkward and clunky. There’ll be no flow because you’re so busy thinking about what to say next that you don’t really hear what they’re saying.

Listening to the other person is essential to avoid awkward silences because the cues to where the conversation can go next are contained in what they’re saying now. For example, if they said something like ‘I flew to India in February’ within that one sentence are three cues you could pick up on – flying, India and February. Any one of them is a good conversation point but you could miss them all if you’re unable to listen because your inner monologue is frantically searching for interesting holidays you‘ve been on.

Interesting people are those who are interested in others. Try to turn the inner monologue down and be present and attentive to the person in front of you.

Distractions such as receiving text messages, answering calls or constantly nipping outside to have a cigarette or to check your appearance in the loo are going to stop the conversation from flowing. Each time you break off from the conversation there could be an awkward moment or two as you try to get started again. Obviously there’ll be some necessary breaks such as a visit to the bathroom or a trip to the bar, but as far as possible stay with your date for the entire time. This means your mind and body should be with them. You may have a busy life, lots on your mind and concerns about where you’re going to find a cab to take you home but dwelling on outside concerns will break the connection between you.

Draw on what you know

If the conversation dries up draw on a universal question like ‘Where are you from?’ Everyone has a place of origin and whether it’s somewhere you’ve visited or not it’s a great starting point for a conversation that isn’t too prying, personal or intrusive. You can ask about the culture, history and environment of the place whether they’re from somewhere in the UK or further afield. If it’s a place you know well you can share stories and you may find you have more in common than you realised.

If the conversation really isn’t flowing either because of nerves or shyness don’t give up on the date. Suggest an activity. This could be going for a walk, getting something to eat or having a game of pool if you’re in a bar. Not everyone does well in face to face conversations but might open up and relax when they’re involved in some kind of activity. Remember that 80% of communication is non-verbal so you don’t need to be a great conversationalist to have great dates just arrange ones where the onus is on connecting through doing rather than speaking, walking is particularly good as it’s sometimes easier to talk when you’re alongside someone rather than facing them.