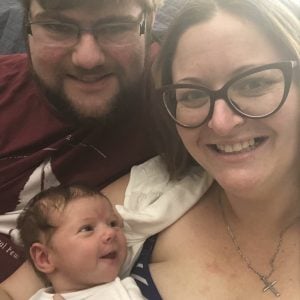 Our love story started when we matched on eharmony. The first thing I did was stalk him on Facebook, and saw we had two mutual friends. I ended up ringing one of the friends to see if she knew him so I could get her opinion. She raved about him, so we started talking and the rest is history. For the first date, Adam came to my house – I cooked dinner and we played a board game. It was super awkward because he was really shy, but he was nice, and I wanted to get to know him more. Adam and I have similar interests – we like to joke that we are “complementary and complimentary”; we complement each other well being two sides of the same coin, but we also like to compliment one another and say nice things!

Adam and I are both Christians, so for us dating is intentional, we go into it with the purpose of getting married if the relationship works out. Big milestones for us were when we decided we wanted to be an official couple, then shortly after when we got engaged. We then became parents after having our first child on November 28th, 2018.